3 Home Construction Mistakes You Should Watch Out For

29 Jan 3 Home Construction Mistakes You Should Watch Out For 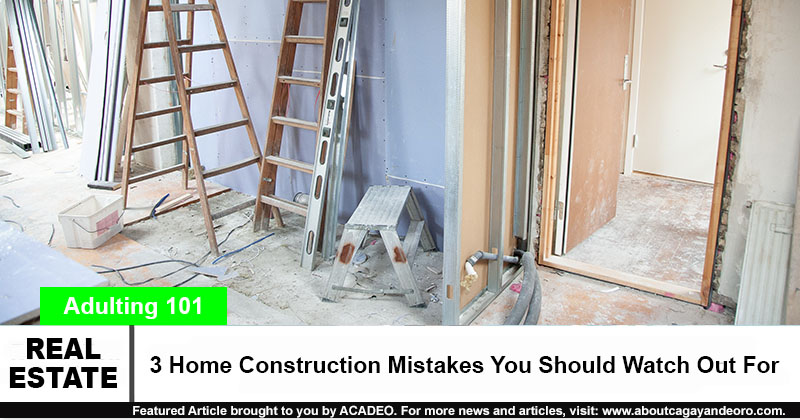 Hey there, Acadeo friends! How are you holding up?

Thanks to the COVID-19 pandemic, many of us are either stuck at home for quarantine, or facing more time alone than we used to experience because of many leisure establishments being closed. Big groups are discouraged when traveling outside, and it’s strongly cautioned to maintain a lot of distance between ourselves and others for our own safety.

Because of this, many of us may have turned to do-it-yourself construction around the house. Some of us may have gone on the internet to look up house design plans, and considered how to incorporate these ideas into reality. In fact, there’s a unique rise in home renovation activities in some neighborhoods, because now there’s time to supervise or oversee such house plans.

However, this comes with risks as well. Here are 5 common construction mistakes that people tend to commit.

Unless you’re renovating your home yourself, chances are you’re hiring a foreman and some construction workers to do the hard work. It’s also likely that your foreman will make suggestions about how to do things. Now, this isn’t always a bad thing – they are still professionals, and they know what they’re doing.

That being said, it can’t be avoided that some construction professionals will make suggestions that will benefit them at your expense, sometimes literally. After all, construction is still a business, and there’s money to be made from either cutting corners or overpricing materials.

What we would suggest is to ask around first before committing to the first foreman or construction worker you get in contact with. Research the average worker rates, what kind of materials are best used for the renovation you have in mind, and how long such renovations usually take. If you’re paying a daily worker rate, insist on a reasonable working schedule where you can observe the work being done.

Most importantly, ask for receipts for any materials if you’re not buying them yourselves. Not everyone is out to overcharge you, but it doesn’t hurt to be professional as well. After all, you’re spending your hard-earned money for earnest work.

BE PREPARED IN CASE YOU GO OVER YOUR BUDGET

When it comes to construction work, a budget is extremely important, because this will dictate many things about your renovation, like the daily worker rate you can afford to pay and the quality of the materials you can use. Sticking to a budget is the ideal plan, but as with many things, accidents or unforeseen issues can happen.

For example, if your home project requires a lot of drilling, it’s very likely that you’ll need to replace the drill bits a few times during the construction. Nails, bolts, and screws are relatively cheap in small amounts, but you won’t be using the same sizes throughout for various reasons, so you could be paying for several kinds by weight and have leftover materials that you can’t return.

Similarly, many hardware stores sell prefabricated materials like marine plywood or PVC paneling in fixed measurements, and will charge you extra to have them custom cut. That is to say, you may not account for these expenses initially, and you may have to pay extra to get the work done the way you want it.

In the long run, it’s much cheaper to have construction work done right the first time rather than have things fixed or changed later. Stick to your budget as much as you can, but do have at least 40-60% of your intended budget set aside for surprise expenses, just in case. It’s better to pay a little extra now than up to 5 times your original budget later for repairs and backjobs.

HAVE AN IDEA ABOUT WHAT YOU WANT – AND THEN CHANGE IT

Here’s something I’ve personally learned when I had my home renovated: unless you have an endless supply of money, what you want and what you get won’t be the same.

It requires very careful planning and budgeting to get exactly the kind of construction work that you want, but many of us don’t have the skills, finances, or time to invest into such a project. This is why it’s important to manage your expectations with construction work and renovations, as it’s very likely you’ll have to compromise on some things because it’s outside of your budget, you don’t have the time to wait, or the idea that you originally had is too complicated.

Don’t be disheartened! It’s actually pretty common for plans to change – and you’ll be surprised by the results too. Some deviation from your original idea is bound to happen, but it doesn’t mean it’s a bad thing.

For example, when I had walls built around my home, the foreman suggested that the fences I originally wanted wouldn’t be ideal for the walls, so we agreed to build the walls higher instead. Despite my initial dismay, this decision turned out to be a blessing in disguise, because when the rainy season came, the higher walls protected my windows from taking in water and avoiding the dreaded flooding inside the house. Sometimes, change is for the better!

Like with many things in life, we have to make do with what we have. If your budget can only afford a certain finish or only renovating a limited area, that’s okay! There’s always time to do so later. Don’t force yourself to pay for more than what you can afford! Your home will still be your home, even no matter what it looks like. As long as you care for it and cherish it with your loved ones, the shape of your home ultimately doesn’t matter.

Good luck with your construction projects, and remember to stay safe!