Australian National & 1 Other Arrested @ Brgy. Canitoan For Having Sex With Minors & Taking Videos 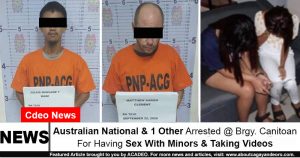 Mga higala! The joint personnel of the Regional Special Operation Unit-10, Anti-Cybercrime Group-10, Police Station 7, and the City Social Welfare & Development (CSWD) have recently conducted a rescue operation inside a subdivision in Brgy. Canitoan, Cagayan de Oro City, and arrested an Australian national together with one Filipino citizen, for allegedly forcing minors to have sex and uploading videos of this online.

The authorities successfully rescued 2 female minors from the suspects.

The said operation was conducted with the help of information from a confidential agent who revealed that an Australian national is bringing minors to his rented house in Canitoan and is forcing them to use illegal drugs. He then coerces them to have sex while taking photos and videos.

Sex toys, phones, and drug paraphernalia were confiscated inside the suspect’s residence.