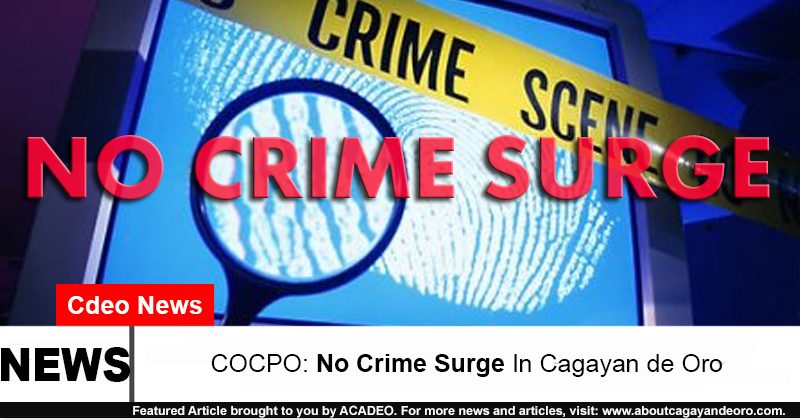 To alleviate the worries of the public, below are the facts he enumerated in his post:

1. Yes! There are highly-publicized crimes in Cagayan de Oro City recently, but the truth is, there is no crime surge. Our weekly average crime incident in the city is 10. The statistics even dipped down to 8 incidents a week. This is way lower compared to the crime incidents in other highly urbanized cities;

2. The city is still very safe and there is no cause for alarm. The recent crimes that happened in the city are in no way connected to each other. There is no mentally deranged serial criminal, serial killer, or serial rapist that will prey on you or your loved ones;

3. Yes. The police may not completely prevent crime from happening 100% (with the current police-population ratio of 1:800+), but the police are doubling our effort in crime prevention thru preemptive deployment and intel ops. If we failed to prevent it, we investigate and solve it. Despite the meager resources (personnel and mobility), records show that from January to July, 98% of the total index crime in the city is either CLEARED or SOLVED;

4. From January to July, all rape cases in the city are either CLEARED or SOLVED;

5. Yes. There are a lot of complaints against the police on social media. However, if they continue to rant aimlessly while hiding behind assumed identities, we will be forced to attend to other pressing concerns instead of wasting our time guessing the answer to their riddles.

Piece of advice: “If you have complaints against the police, go to NAPOLCOM, PLEB, RIAS, OMBUDSMAN, CHR, or their immediate superiors and report them. These offices will be more than willing to assist you because it is their job to remove rouge police officers from the service”;

6. We do not help our city by spreading unverified stories. Yes. There are crimes happening, but instead of being unreasonably critical, let us help our city by being proactive and vigilant.