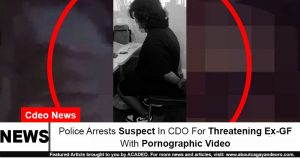 Mga higala! A male suspect was recently apprehended by the Anti-Cyber Crime Group of Region 10 and the Cagayan de Oro City Police Office (COCPO) after his ex-girlfriend reported him for threatening to spread an indecent or pornographic video of her online if she refuses to get back with him!

According to reports, the ex-GF first decided to comply with the suspect because of the video, however, when the suspect demanded to meet with her and threatened to send the video to her family (and post it online) if she didn’t show up, she chose to report to the authorities instead and had him arrested.

Watch the interview below for more details: