Typhoon Rolly May Become A Super Typhoon Before Luzon Landfall

Posted at 07:48h in Weather Forecast by Luis 0 Comments
Share

Mga higala! According to the United States’ Joint Typhoon Warning Center (JTWC) Typhoon Rolly (aka Goni) may reach a super typhoon intensity before its landfall over Luzon!

Despite this, PAGASA said that Rolly can become a very strong typhoon prior to its landfall and has warned the public of a possible Signal No. 3 or 4!

“Given that it is likely for this typhoon to continue intensifying prior to landfall, the highest possible tropical cyclone wind signal that will be raised throughout the passage of this typhoon will be Signal No. 3 or 4.” 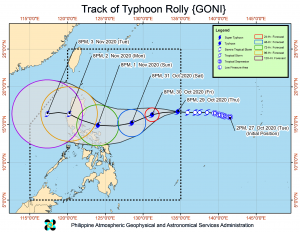